Okay so I'm updating my versions of Windy City and Sweet Scar for children as I found the files for them. So I was wondering if anyone knows of any /good/ (as in, non photoskinned crap) clothing for children? I have a couple of dresses and shoes I found, but more is always good.

How about makeup? Now before you go all "OMG YOU SUPPORT THE DEGRADATION OF YOUNG GIRLS AND SEXUALIZATION AND ADVANTAGE TAKING OF THEM!!!!!!"

SIMS CHILDREN ARE UGLY AS ALL HELL. DO NOT DENY IT. Now before you say...WHAT IS WRONG WITH BEING UGLY YOU HATEFUL HAG BODY/FACE SHAMER THERE ARE WOMEN EVERYWHERE WHO ARE COMMITTING SUICIDE BECAUSE THEY ARE CALLED UGLY!!!!

There is a difference between being "not very pleasing to the eye" and "WTF IS THAT ANATOMICALLY POSSIBLE/Cone/alien head/creepy doll face/axe murderer in training". I don't know about you, but when I was a kid my eyes weren't the size of my forehead nor was my nose taking up 90% of my face. (I also hit puberty when I was 10 and had boobs by then and was shaving my legs by 11 and wearing high heels and that was all of my own doing. IT WAS NOT DUE TO PRESSURE. In fact, as a little girl I used to run around in baby pink heels because I loved the clicky sound. Still do.) 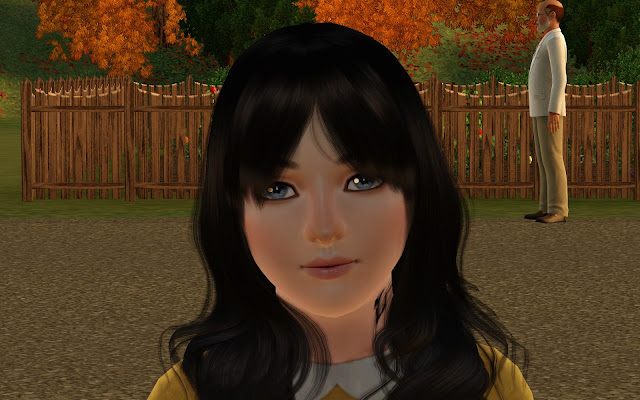 Aaron and Lenore's kid--this is the "after" when I had to go into CAS and edit the shit out of her face. Now she still looks like she's thinking "I'll murder you in your sleep for lord Satan" but at least she's not...well. AS UGLY. Also ignore the creepy old dude behind her--I have no idea who he is and why he is on my property. <<<:

Edit: So far I'll be updating Windy City, Sweet Scar and Vera. Any other hairs that have children versions you guys would like?
Posted by bringmevictory at 2/16/2013 10:57:00 am